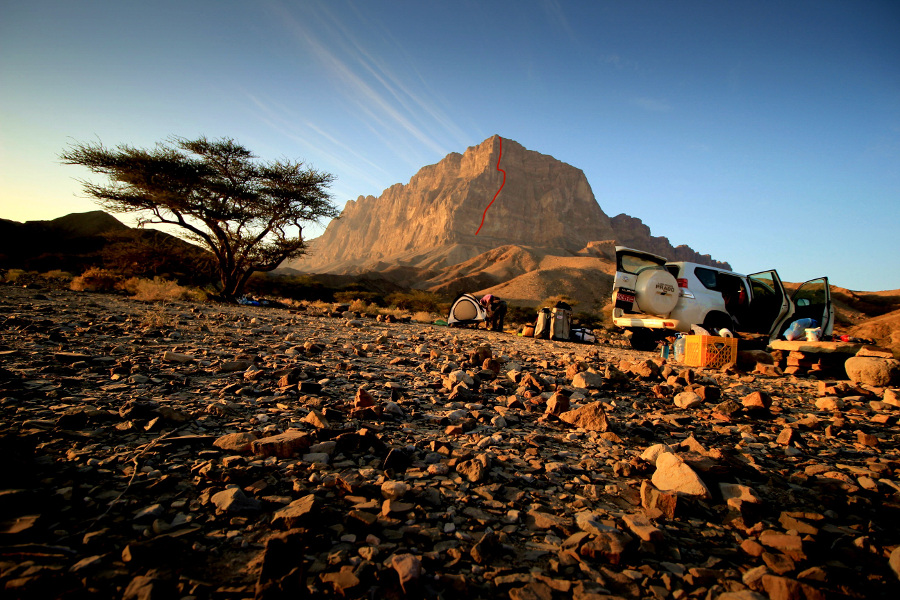 “Totem Cams saved my life” the story of Gregor Staggl :

After 10 days of climbing and getting used to the rock in the beautiful Sultanate of Oman, Jef, Wolfi, Phillip and I decided that it was time to go for the 1000m wall of Jebel Misht. This mountain became one of the main reasons for the trip, after watching the video by Hansjörg Auer and Much Mayr climbing ‘Fata Morgana’, a 7c line through the south face with only few bolts.
In the afternoon, we arrived at our campsite and could finally gaze upon the impressive mountain face. Eagerly we pulled out the guidebook to study all the different lines that led through the wall. There it was, “Fata Morgana”. The name itself had an ominous touch to it and Jef and I were keen on trying it ourselves. Still, it was quite intimidating and therefore, we chose another route as test piece.

‘Make love not war’, 7b, 25 pitches through the southeast wall. With its many hard pitches (one 7b, three 7a’s and several 6b+ to 6c), we thought it was comparable in terms of difficulty, but less serious since all the belays and hard slabs were bolted. Our goal was to make a team-red-point ascent, thus we prepared for a bivvy on the ledge after pitch 15. We had to pack light with 2 liters of water each, a few Oatkings and two Snickers for the top. Regarding the gear, one set of Totem Cams complemented with some bigger and smaller sizes and some nuts had to be enough.

In the early hours, we set out for the silhouette of Jebel Misht and reached the mountain face short before dawn. There our paths separated. Wolfi and Phillip searched for the entry of ‘Shukran’ and Jef and I looked for the features of our line.
At first daylight, we started the climb and made fast progress. Jef took care of two 7a’s and I led the 7b-pitch. Onsighting every pitch except for a 6c-slab that I had to do twice, we already reached the bivvy ledge at 2pm. Climbing in the sun with only little water was exhausting, but at this rate, we began believing in a one-day-ascent. Finally, we reached the last hard pitch, a 7a-50m-crack. Tired and thirsty, I was glad that it was again Jef’s turn to lead. When he managed to ascend to the next anchor onsight, I joyously cleared my belay and scrambled up to give him the high-five he earned. From there it was only eight pitches to go, many 5’s and nothing harder than 6a+. In our heads, we were already on the peak and could start planning for “Fata Morgana”.

It was two hours until dusk. To make the most out of the remaining daylight, we postponed the next drinking break to the next belay. Keeping the backpack, I hastily started with the next pitch, a rather short 5+. I scrambled up the chimney, placed a red Totem at 5 meters and a green one at 10. Thirsty and tired, I grabbed a flake with my right hand, doubled it and wanted to pull my weight closer to the top.

Tearing out the flake, I was suddenly in mid-air. Falling and screaming, I braced myself for the impact. The fall should have been over by then, but it was not. I took a deep breath and screamed again. In an instant, I came to an abrupt halt, crashing sideways against the wall. After falling 25 meters, I found myself hanging below the anchor. The green Totem was placed badly and broke out under the impact and so I was hanging in the lower, red cam. I could tell you now that I had seen my life flashing before my eyes or that my thoughts were with my one true love, but to be honest, my first thought was that I had to reclimb that stupid pitch. Then, I took a close look at my left hand, which was bleeding heavily. There was a deep cut in my palm. Anxiously I tried moving all my fingers and was quite relieved, when everything moved as it was supposed to.

Reaching the summit was now out of question. Jef had to lower me to the previous belay, where I could attach myself. After retrieving the red Totem that had held my fall, he repelled to my position and helped me treating the wound. We tried to immobilize my left thumb with the bandages and luckily, I could still use my left fingers and my right hand. Calming down a bit, we proceeded with the repelling. Jef always went first and prepared everything for me to follow. I tried to help as much as I could and in less than two hours, we reached the bottom. The sun had set half an hour before and so we were sitting in the dark, regaining some strength and eating the Snickers that we had saved for the top.

It still took us two hours to reach the camp and get to our car. On the way, we could contact Wolfi and Phillip, who managed to reach the top of ‘Shukran’, and tell them that we were heading for the hospital. While they were beginning the long descent, we drove to the next bigger city called Ibri. At the end of my strength, I fell asleep during the drive and at midnight, I could finally see a doctor. With a big but superficial wound on my hip, a rope burn on my right arm, many scratches and a deep cut in my left palm, I was lucky. No broken bones, only some stitches. At half past 4 a.m., I could finally lie down in our tent. Exhausted, but alive!