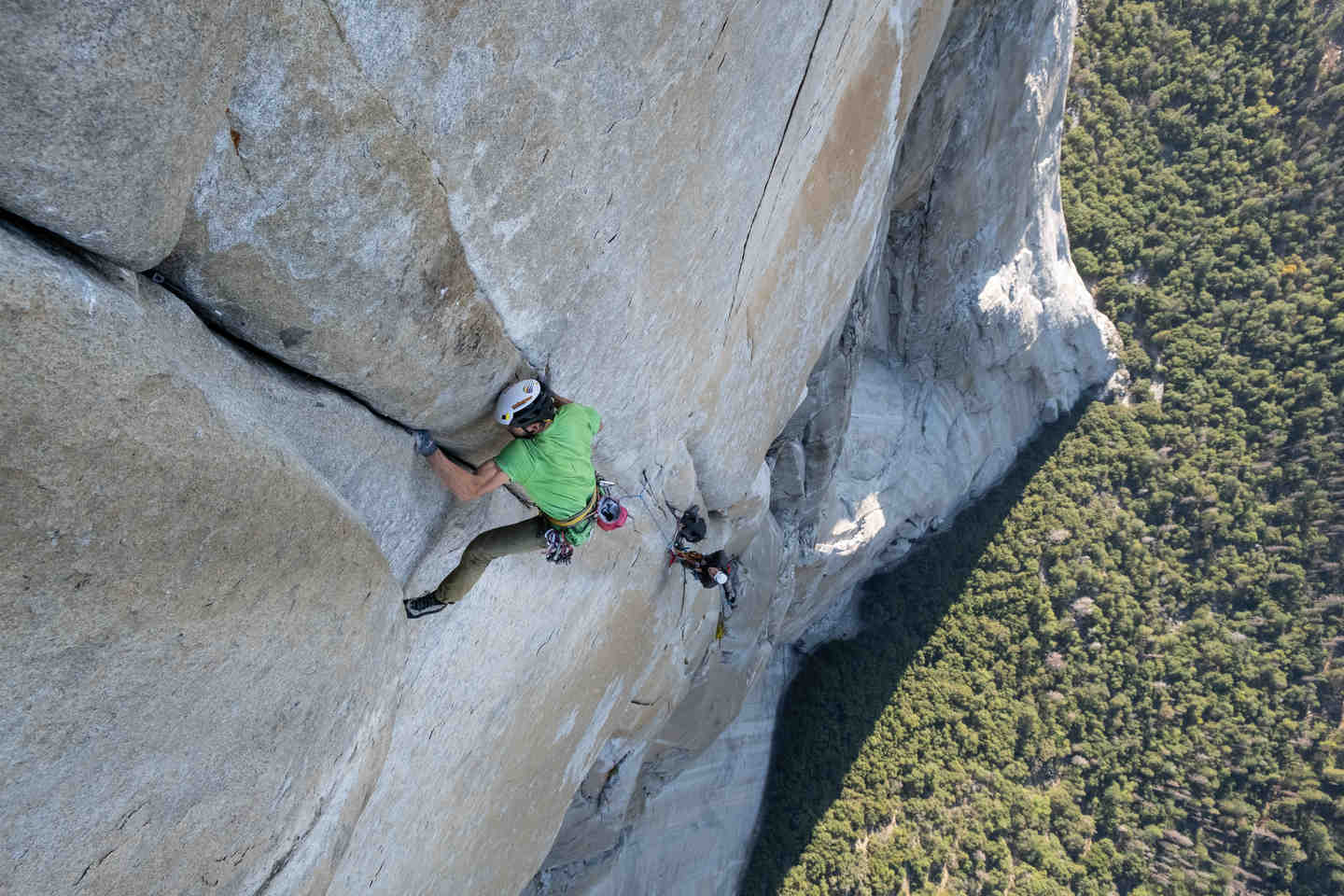 A story of our Chilean ambassador, Max Didier, who last year for these dates, embarked on the adventure of trying to free climb the Salathe Wall, in the Yosemite Valley.

Last September, my colleagues Nicolas Gantz, Carlos Lastra, Diego Diaz and I embarked on the adventure of trying the free ascent of the Salathe Wall.

Shortly after starting the project, an unfortunate incidental ended with Diego back to Chile. Unfortunately, we couldn’t do anything to avoid their departure.

I understood that the project was finished at that time and take it immediately to the train station. Diego left for home and with him also my hopes of climbing Salathe in free.

When returning to Camp 4 I did not know if this trip made sense, without my partner it was impossible to make the ascent. Luckily, a friend named Austin quickly joined us in the project, which I put into action again.

On the day of the try we got up at 4 am and started to climb the Freeblast. At 11 am we were in the pitch 12 (Heart Ledges), there we ate something and continue until the pitch 20. We came to rest to “The Alcove” at about 4 pm. A long day but we already had the 20 first pitches liberated.

The next morning we continue early towards the first crux of the route; the famous Boulder Problem, which I was able to sent at the second try. At about 1 pm we were already eating and resting before the pitch 26.

The third day we woke up early in “The Block”. We prepare everything and continue towards the second crux of the route: the Enduro Corner. I was able to sent at the first try. Very happy we continue to the roof where Freerider and Salathe Wall are divided.

I was able to send the roof onsigth and the joy was very high. We were already on the edge of the Headwall and I decided to climb them artificial to save energy and arrive to the “Long Ledge” (our camp for the next days). During the climb in artificial take advantage to read well the lengths. At 3 pm on the third day we were already installed in Long Ledge. We decided to take the fourth day of rest to recover the body and the hands.

That day was wonderful, we woke without alarm on a terrace 800 meters from the ground without worries, just eat and rest. We could contemplate the valley and see from above other teams climbing different routes of the captain.

The next morning we had breakfast and go down until the next three pitches to begin working. The first is an open dihedral length, slightly overhanging, with broad cracks and slab output with small feet. It took me all the morning to learn the correct sequence.

The sixth day on the wall was incredible. Early in the morning we wait for the light of the sun and went to the first pitch of the Headwall. I heated in a first try and felt that the next try I could chain. I memorized the sequence again and done it without expectations, I passed the dihedral and I could stop on the slab, finally I reached the anchor.

The second pitch is a crack of 40 meters with two small roofs that varies its width from fingers to tight hand. I wanted to give it all in the first try and I started climbing through the hard sections at the edge of falling. I was advancing slowly, becoming more tired, until I found a handshake before the final crux.

Finally, exhausted and without knowing the sequence, I tried to solve twice the exit and in the third attempt I flew. The try lasted 45 minutes.

I felt the days on the wall and needed to recover my hands to give back to the crack of the second pitch so, after two days of climbing we decided to take rest.

We wake up early on the 8th, have a light breakfast and go down to the anchor of the second pitch. I started climbing with a little bit of anxiety and feeling tired of the days on the wall. The arms and legs did not yield what I had expected and I flew before I even reached the first crux. I understood that I was exhausted but tried the length twice more, without success. Exhausted I felt the impotence of not being able to climb the route. I also felt the mental tiredness of thinking about climb the route for so many days and seeing how my possibilities ran out.

“We had done everything according to the plan. The logistics and the team worked perfectly. My companions supported me a lot and that gave me much joy and tranquility”

When we came to rest we saw that we had food left to try another day. We decided not to surrender and try the crack one last time. We had done everything according to the plan. The logistics and the team worked perfectly. My companions supported me to a lot and that gave me much joy and tranquility. We went to sleep without putting the alarm for the next day. We plan to climb the crack in the afternoon so we have more rest time.

On the ninth day I woke up and looked at the crack, it was strange because I no longer felt that desire to climb it. We have lunch and prepared to go down to try it for the last time. When I was going down the rope, I looked at the route and felt pain in my hands and feet. The body seemed not to recover during the night and the head was filled with thoughts outside the climb. Finally, I decided not to try again. I released the strings and continued the 5 pitches to the summit. The route had won this battle.

We went to summit with the last lights, we ate, celebrated the try and went to sleep. We woke up in the majestic top of the captain after 9 days on the wall, with many feelings. On the one hand a bit frustrated and disappointed of my performance. On the other hand I felt the happiness of having a great learning of humility and tolerance.

Now I just look forward to reviving this beautiful experience with Nicolas and Agustine, and I hope to be better prepared and be able to climb the Salathe Wall.

Today I am training full of motivation, to continue pushing my limits and achieve more ambitious goals. I have seen that little by little everything is possible, you only have to be patient. Climbing is a sport where progress is linked to the experience and that can not be accelerated.